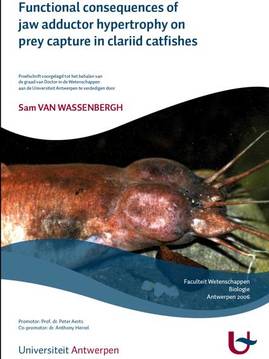 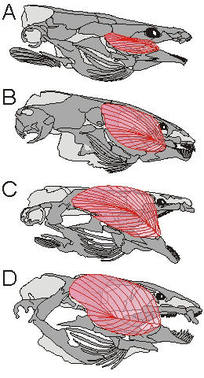 Chapter 1: Introduction: jaw muscle hypertrophy in clariid catfish
Within the family Clariidae or air breathing catfishes, several species have developed unusually large (hypertrophied) jaw closing muscles. The extremely hypertrophied morphs (C and D of the figure on the left) have jaw adductors with physiological cross-sectional areas of up to 7 times those of the non-hypertrophied morphs (for a given skull length).

Inevitably, the extreme variation in this component of the cranial musculo-skeletal system will have important consequences on its function during feeding. Biomechanical modeling has shown that species with enlarged jaw closers can theoretically produce a higher maximal biting force (Herrel et al., 2002). However, biting is only one of the many functions of the cranial musculo-skeletal system in fish. As the hypertrophied jaw muscles also strongly interact with the suspensorium and the neurocranium, effects on the structure and mechanics of the bucco-pharyngeal expansion apparatus (responsible for prey capture, -transport, -processing, aquatic respiration and air-breathing) are expected. The aim of this study is to investigate the consequences of jaw closer hypertrophy on feeding in clariid catfishes. 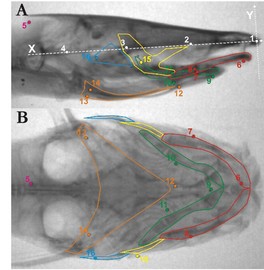 Chapter 2: Mechanisms of mouth opening and hyoid depression
In a detailed analysis of the movements by the complexly interconnected skeletal elements of the feeding system, we try to gain some insight in the mechanics of prey capture in this catfish.  More specifically, a kinematic analysis using high-speed X-ray videos of prey-capturing catfish allowed us to evaluate the action of a number of mechanical pathways for mouth opening and hyoid depression proposed in previous morphological studies.  More information can be found in the article: 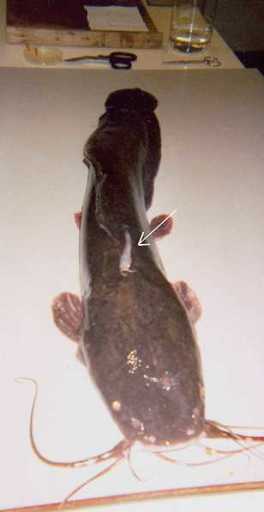 left:  Picture illustrating the large increase in size that takes place during the life of the catfish Clarias gariepinus.  The arrow indicates the smallest individual used in our study.

Although scaling relationships on aquatic feeding kinematics have been studied previously, the size-related effects of kinematics on performance (displacing the prey towards the mouth) and the biomechanical causes of the observed changes in suction feeding kinematics (decreasing speed of cranial expansion with growth) remain unclear.  As our study species (Clarias gariepinus, Clariallabes longicauda, Gymnallabes typus and Channallabes apus) differ considerably in adult cranial size, a better knowledge on the biomechanical consequences of size on the suction feeding process in Clariidae is more than welcome.  In this part of the study, we analyzed prey capture kinematics in an ontogenetic series of the African catfish (Clarias gariepinus), a species that can grow up to 1.5 m in total length.  By modelling the observed expanding head of C. gariepinus as a series of expanding hollow elliptical cylinders, spatio-temporal patterns of water flow, buccal pressure and power requirement for the expansive phase of prey capture were calculated.  Currently, scaling of the contractile properties of the muscles used during feeding are analysed in collaboration with Dr. Rob James (Coventry University, UK).  More information and results are available in the following  papers: 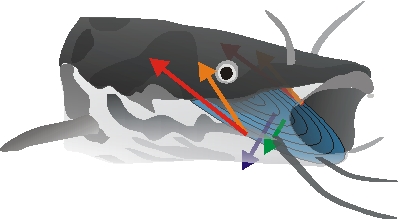 Chapter 5: A model of mouth closing movements in Clariidae: the role of enlarged jaw adductors
Faster accelerations of the lower jaw can be expected from fishes that have large and forceful jaw muscles.  Therefore, the observed jaw adductor hypertrophy in Clariidae could have a positive effect on the speed of jaw closure.  In turn, this could increase the catfishes performance in capturing fast and agile prey such as small fishes.  To investigate the role of jaw muscle hypertrophy on the speed of jaw closure, we developed a biomechanical model in which the lower jaw is represented as a rotating half-elliptic surface.  More information and results can be found in:

Chapter 6: Effects on lateral expansion during suction feeding
The enlarged jaw muscles tightly cover the suspensoria, which are (especially in the hard-biting species) firmly connected to the neurocranium.  Consequently, the jaw adductor hypertrophy could interfere with the lateral expansion of the buccal cavity occurring during suction generation, in which the suspensoria are abducted (i.e. rotated away from the medial body axis).  This suspensorium-abduction can be hindered by either visco-elastic deformation of the jaw muscles or by the strongly interdigitated connection with the neurocranium.  More information and results can be found in:  Van Wassenbergh, S., Herrel, A., Adriaens, D. and Aerts, P. (2004). Effects of jaw adductor hypertrophy on buccal expansions during feeding of air breathing catfishes (Teleostei, Clariidae). Zoomorphology 123, 81-93 (full text PDF) (Full text HTML at SpringerLink) 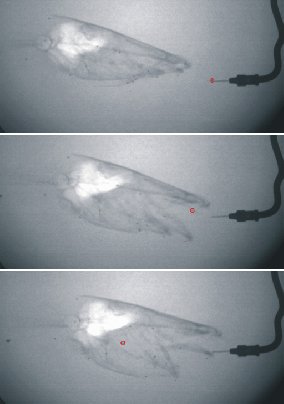 Chapter 7: No trade-off between biting and suction performance
It is generally assumed that biting performance trades off with suction performance in fish because both feeding types may place conflicting demands on the cranial musculo-skeletal system. In this study, suction feeding performance was compared between three clariid catfish species differing considerably in their biting capacity, by measuring the velocity of a standardized prey being sucked into the buccal cavity using high-speed cineradiogaphy (see figure and video below).  As all species were able to accelerate the prey to similar peak velocities, our results demonstrate the possibility for catfishes to increase bite performance considerably without compromising in suction performance. More information is found in the following article
Van Wassenbergh S., Herrel A., Adriaens, D. and Aerts P. (2007) No trade-off between biting and suction feeding performance in clariid catfishes. J. Exp. Biol. 210: 27-36. full text pdf

Chapter 8: Variation in sternohyoideus muscle morphology: implications for suction feeding
One of the levels at which suction performance can be increased considerably, is by increasing the magnitude and/or speed of the depression of the hyoid apparatus.  Furthermore, no mechanical interference can be expected between the size of jaw adductors and the lowering of the mouth floor by depressing the hyoid.  Therefore, if catfishes with hypertrophied jaw adductors need to increase their suction performance, modifications to the hyoid depression system are probably the most obvious option.  In this part of my research, I focus on the mechanics of hyoid depression and how morphological variation in the sternohyoideus muscle (the hyoid depressor muscle) is related to the way the hyoid is depressed.  The figure below (ventral view on the head) illustrates the difference in sternohyoideus morphology between Clarias gariepinus (left) and Gymnallabes typus (right).
Van Wassenbergh S.,Herrel A. , Adriaens, D. and Aerts, P. (2007).  Interspecific variation in sternohyoideus muscle morphology in clariid catfishes: implications for suction feeding. J. Morphol. 268: 232-242 full text (PDF)

Chapter 9: Modulation and variability of prey capture kinematics
Huysentruyt and co-workers (2004, see lab publications) showed that the species with jaw adductor hypertrophy  have a less diverse diet.  According to a hypothesis in evolutionary biology, such trophic specialists are expected to be less flexible in their feeding capacities compared to species feeding on a wide range of different prey (trophic generalists such as Clarias gariepinus).  In this part of our catfish project, we quantified the variability in prey capture kinematics in response to different prey types and different prey positions and tested this hypothesis within this group of fishes.  More information can be found in: Modulation and variability of prey capture kinematics in clariid catfishes by Van Wassenbergh, S., Herrel, A., Adriaens, D. and Aerts, P. J. Exp. Zool. 305A: 559-569. full text (PDF)

Chapter 10: Catfish strikes on land
An important step towards our understanding of the evolution of terrestriality in vertebrates is to identify how the aquatic ancestors of tetrapods were able to exploit terrestrial prey resources. We discovered that the eel-catfish (Channallabes apus), an inhabitant of the muddy swamps of tropical Africa, possesses the remarkable ability to forage and capture prey on land. The animal’s capacity to bend the head down towards the substrate while feeding terrestrially appears to be an essential feature for fishes to make the transition from an aquatic to a terrestrial feeding mode.