Here is an overview of press reports on my work (most recent on top):

2019: Catch and release hampers feeding performance in fish
We showed that holes in fishes' jaws caused by fishing hooks reduces their suction power, making it more difficult for them to capture food. The study was published in The Journal of Experimental Biology, and covered in a variety of news sources, including The Independent, iNews UK, Phys.org, Discovery Magazine, De Standaard, Gazet van Antwerpen, Radio Zuidrand, and CBC Radio.

2016: Tilapia parents churn to cough kids clear
Kathryn Knight from Inside JEB made an interview-report on my study on the kinematics of mouthbrooding in the Nile tilapia published in The Journal of Experimental Biology.

2015: The jaws of a four-eyed fish
We showed how the four-eyed fish Anableps anableps uses its protruding jaw to capture prey on land.  The study was published in The Journal of Experimental Biology, and covered in the same journal (Inside JEB), and as a "Research Highlight" in Nature.

2015: A 'water tongue' to grab prey on land
We showed how water is used by mudskippers when they feed on land: Periophthalmus barbarus uses water as a tongue to aid in the capturing and intra-oral transporting of food.  The study was published in Proceeding of the Royal Society B, and covered in Nature’s News , Science News, New Scientist, National Geographic, Scientific American and CBC Radio.

2015: Boxfish swimming paradox resolved
We showed that, contrary to previous claims, the shape of the bony carapace of boxfish does not cause course-stabilisation during swimming.  Instead, the flow over the boxfish's body promotes manoevrability.  The study was published in Journal of the Royal Society Interface (full article pdf), and was covered in Nature's News and Views section (pdf).

2014: Fish grind teeth to grunt
I helped making X-ray videos of sound-producing French Grunts that allowed a team led by Frédéric Bertucci of the University of Liége to locate the source of their gunting sounds: the grinding motions of the pharyngeal jaws.  The study was published in the Journal of Experimental Biology (full article), and was covered as a research highlight in the same journal (inside JEB) as well as in Nature. 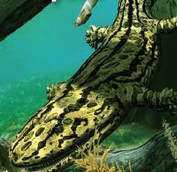 2013: Eating was tough for early tetrapods
This report in Science includes an interview about my work on terrestrial feeding in amphibous fishes.  It was published following a symposium on water-to-land transitions at the SICB-conference in San Francisco, for which I was an invited speaker.

2011: Why seahorses resemble horses
I discovered an advantage of the horse-like properties of seahorses (their curved trunk and tilted head) for the way they capture their prey. The study was published in Nature Communications.  A youtube video made by the Nature editors summarises the article.  The article was covered by Belgian television (ATV), and many websites (BBC, MSNBC, LiveScience, Kennislink).

2006: Catfish strikes on land
We discovered that the eel-catfish (Channallabes apus), an inhabitant of the muddy swamps of tropical Africa, possesses the remarkable ability to forage and capture prey on land. The animal’s capacity to bend the head down towards the substrate while feeding terrestrially appears to be an essential feature for fishes to make the transition from an aquatic to a terrestrial feeding mode.  The study was published in Nature, and covered by a long list of TV stations (VTM, Discovery Channel Canada, ATV), newspapers and magazines (De morgen (BE) , De Standaard (BE) ,Gazet Van Antwerpen (BE), Het Laatste Nieuws (BE), EOS (BE), Metro (BE), Kamagurka (BE), Berliner Zeitung (DE), Spiegel Online (DE), New York Times (USA)), and websites (VPRO (NL), BBC NEWS (UK), ORF.at (AT), 20 Minuten (CH), Tiede (FI), Elementy.ru (RU), Membrana (RU), Fox News (USA), NPR (USA), National Geographic (USA), Dajiyuan (CHINA), Wild Singapore (SINGAPORE)).  The original article became the 6th most read article on the Nature website of the year 2006.